Maui Multi-Services Center (One-Stop):  A Land Donation Offer has been received from the State of Hawaii and has been approved by VA Central Office.  To complete the State’s offer to VA an MOU speaking to the Educational mission of the VA facility, and others outside of VA envisioned for the land was completed and provided to the State in August of 2018.  The MOU and land donation agreement was submitted by the State for legal review which was completed by May 24, 2019.  Thirty percent design of the new CBOC has been accomplished with a remaining design/build project to be completed by late-FY19.  Activation is projected during late FY20.  The Department of Education communicated that project obstacles presented to them internally from their legal review will require them to terminate their further participation in the VA solicitation process.  Recently VA was contacted by the State Adjutant General and State Office of Veterans Services Director about further discussion on the State side about this action.  VA agreed to hold the Solicitation open briefly for this interaction to occur, and further feedback to VA made. A meeting, including VAPIHCS leadership was held on August 20 with the Governor, State DOE Superintendent, Adjutant General and State Veterans Director to discuss the land donation. The DOE requested more time for final questions and a determination about the land offer. A meeting was held between VA and the DOE, Sept. 23 to have a culminating discussion, and resolve the State’s position about the land offer.  The Superintendent of Education, her Chief of Staff and Facility Works Director gave the go ahead for the VA portion of the project, for final preparatory steps to award, and further development of the educational relationship, not to impede the land award itself.  Meetings with the State DOE were held to address both the land lease final reqs. and the educational relationship program building.  The parties agreed to finalize details of a submittal package to the State Dept. of Land and Natural Resources (DLNR) Board meeting on January 24, for final State approval leading to award of the land lease.  Preparation of the package is underway. VA just notified this week of the Departure of Mr. John Chung, State DOE Director of Facilities, and key partner for the project. Meeting will be held soon with his successor for details and confirmation of the DLNR meeting.  DOE unable as of this date to confirm meeting for VA with Mr. Chung’s successor. No further progress as of this writing. VA considering cancellation of the current solicitation, and re-advertising with wider scope. DOE would be enabled to respond and would be considered should they so choose.  VA cancelled the current solicitation, in concurrence with DoE, and respecting their constraints on otherwise completing remaining actions to complete the land agreement award process.

Next Milestone:  VA to re- announce and conduct a market survey for land or land and buildings which may be available on Maui.

Aloha,
It is with sadness that we at West Maui Veterans Club, Inc., have decided to cancel the Saturday 23rd May Service.  This is due to the difficulties around dealing with the current pandemic.
We are hopeful that our invited guest speaker, Mayor Victorino, will be able to speak at the event in the year 2021.
If there is any change we will contact you.
Mr. Mayor, we send our regrets.
Thank you,
Paul Laub,
President
West Maui Veterans Club, Inc. 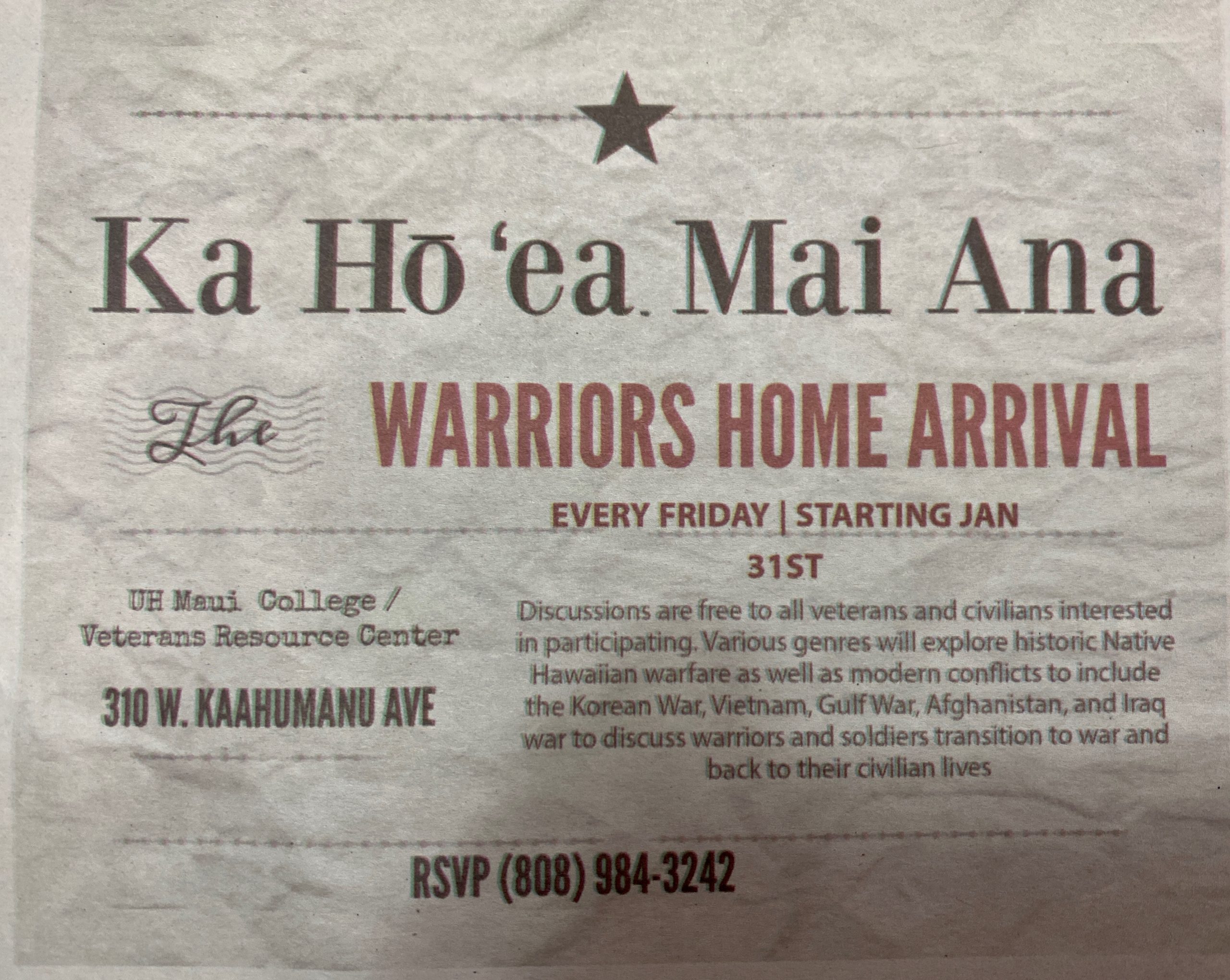