Every now and then, in the middle of the constant barrage of crap that’s just pissing us all off these days, we come across a story, a feat, an event that just makes us stop in our tracks.

This was one for me.

Cody Green was a 12-year kid in Indiana who was diagnosed with leukemia at 22 months old. He loved the Marines, and his parents said he drew strength and courage from the Marine Corps. as he bravely fought the battle into remission three times. Although he was cancer-free at the time, the chemotherapy had lowered his immune system and he developed a fungus infection that attacked his brain. Two weeks ago, as he struggled to fend off that infection in the hospital, the Marines wanted to show how much they respected his will to live, his strength, honor and courage. They presented Cody with Marine navigator wings and named him an honorary member of the United States Marine Corps.

For one Marine, that wasn’t enough … so that night, before Cody Green passed away, he took it upon himself to stand guard at Cody’s hospital door all night long, 8 hours straight.

Nowhere on the face of this planet is there a country so blessed as we to have men and women such as this. I wish I could personally tell this Marine how proud he makes me to be an American.

Wake for an Indian Warrior

Please click on the image to view more photos. 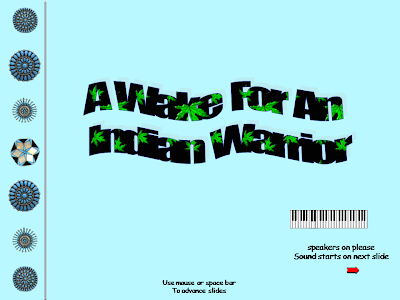 Victory—Federal Judge Permits Father of Serviceman Killed on USS Cole to Express Opposition to Islamic Terrorism Over Objections of Marine Base Commander!

ANN ARBOR, MI – Jesse Nieto is one of those many unsung patriotic Americans. He served 25 years in the Marine Corps, including two combat tours in Vietnam . His youngest son, Marc, and 16 of Marc’s shipmates were killed on October 12, 2000, by Islamic terrorists who bombed the USS Cole. Nieto has worked as a civilian employee at Camp Lejeune Marine Corps Base in North Carolina since 1994. Check out the licence plate

The rest of the story on political correctness run amuck follows.
Beginning in 2001, to show his anger toward the Muslim terrorists who killed his son, Nieto displayed various decals on his vehicle expressing anti-terrorist sentiments, such as “Remember the Cole, 12 Oct 2000, ” “Islam=Terrorism, ” and “We Died, They Rejoiced.” Based on a complaint from a Marine who is married to a Muslim, on July 31, 2008, two military police officers (MPs) issued Nieto a ticket for displaying “offensive material.”

As a result of the Marine Corps’ unlawful action, the Thomas More Law Center, a national public interest law firm based in Ann Arbor, Michigan, filed a federal lawsuit against the Camp Lejeune Commanding Officer and the Base Magistrate on behalf of Nieto in the U.S. District Court for the Eastern District of North Carolina. The civil rights lawsuit challenged the constitutionality of the military’s ban on Nieto’s speech.

Richard Thompson, President and Chief Counsel of the Thomas More Law Center, commented, “Political correctness is destroying our military. 9/11 was caused by Islamic terrorists, and our troops are being killed by Islamic terrorists overseas and on our very own military bases; yet, our commanders are more concerned about ‘diversity’ and not offending the Muslim community. And here, the military re-victimized a father anguishing over the murder of his son by Islamic terrorists because they don’t want to offend Muslims.” During sworn testimony taken in the case, Marine officials admitted they would allow speech that favored Islam, but not Nieto’s speech because they considered it “extremist, indecent, and offensive.”

In his opinion, Judge Howard responded to the government’s argument as follows: “Defendants argue that the regulation is reasonable and necessary because it is aimed at preventing speech the sole intention of which is to inflame the passion of those within the Base command. However, defendants fail to recognize that pro Islamic messages, such as ‘Islam is Peace, ’ and ‘Islam is Love, ’ may be just as incendiary to individuals like plaintiff as anti-Islamic messages are to the individual who complained about plaintiff’s decals.”

Robert Muise, Senior Trial Counsel for the Law Center who handled the case, commented, “As Judge Howard’s well-reasoned opinion makes plain, political correctness and ‘diversity’ do not justify violating the Constitution. As a former Marine, I am ashamed at the way the Marine Corps treated this grieving father and war veteran. When I told him of the good news yesterday, he was elated. He plans to be back on base with his vehicle early next week.”
The Thomas More Law Center defends and promotes America ’s Christian heritage and moral values, including the religious freedom of Christians, time-honored family values, and the sanctity of human life. It supports a strong national defense and an independent and sovereign United States of America . The Law Center accomplishes its mission through litigation, education, and related activities. It does not charge for its services. The Law Center is supported by contributions from individuals, corporations and foundations, and is recognized by the IRS as a section 501(c)(3) organization.

Museum of the Marine Corps in Quantico, VA.

It is a beautiful presentation of the honor, commitment and pride today’s

make sure he or she sees this.

Wouldn’t hurt if all other Americans saw it too!

“WHAT KIND OF A PANSY-ASSED QUESTION IS THAT?

Yep.. no pussy footin’ around the questions with this guy. For the few of you who have missed him, R. Lee Ermey is the host of The History Channel’s ” Mail Call ” and played the Drill Instructor in the movie, ” Full Metal Jacket. ” He recently played the totally unsympathetic psychiatrist in a GIECO commercial. He is a retired Marine Gunnery Sergeant and a very plain speaker, as you will soon read. So, for your entertainment, here is Retired Marine Gunnery Sergeant R. Lee Ermey at his first press conference. The main topic of discussion is the Marine in Iraq who shot an Iraqi insurgent to death.

ANYWAY, THE STORY GOES:
We pick up as a reporter asks about ” how this potential war crime will affect our image in the world “:
Ermey: “WHAT KIND OF A PANSY-ASSED QUESTION IS THAT?”
Reporter 1: “Well, sir I think….”
Ermey: “THINK, FANCY BOY ??! GET THIS THROUGH THAT SEPTIC TANK ON TOP OF YOUR SHOULDERS, MORON : I DON’T GIVE A DAMN WHAT YOU THINK, DO YOU UNDERSTAND ME?? THAT MARINE SHOT AN ENEMY COMBATANT, SHITHEAD. SO GET YOUR HEAD OUT OF YOUR ASS AND DEAL WITH IT BEFORE I MAKE YOU MY OWN PERSONAL PIN CUSHION!!!
NEXT QUESTION: YOU IN THE BLUE SUIT.”
Reporter 2: Don’t you think that the world’s opinion of our operations is important ?
Ermey: “OH SURE! YOU DON’T KNOW THE TIMES I HAVE CRIED MYSELF TO SLEEP WORRYING ABOUT WHAT SOME DAMNED FRENCH PANSY THINKS! OH THE DAYS I HAVE HAD TO WEEP, BECAUSE SOME SHIT EATING TERRORIST SCUMBAG MIGHT BE MAD AT US, BECAUSE WE WENT INTO WHATEVER GOD FORSAKEN HOLE IN THE SHIT THAT HE LIVES IN AND KILLED HIM. WHAT THE HELL KIND OF DUMBASS QUESTION IS THAT YOU PETER-PUFFING JACKASS? WE ARE THE UNITED STATES OF AMERICA , AND WHEN YOU ATTACK US, WE ARE GOING TO COME TO YOUR HOUSE AND BLOW YOUR STINKING CAMEL-LICKING CARCASS INTO PIECES SO SMALL WE WILL BE ABLE TO BURY YOUR SORRY ASS IN A THIMBLE! YEAH, I KNOW WHAT YOU ARE THINKING. YOU ARE PROBABLY AFRAID, THINK ING THAT I HAVE SUCH AN “EXTREME” ATTITUDE AND THAT I NEED TO BE MORE “SENSITIVE” TO OTHER PEOPLE’S FEELINGS. WELL LET ME TELL YOU SOMETHING YOU POLE-SMOKING PANSY! I DON’T GIVE A DAMN WHAT YOU OR ANYBODY ELSE THINKS! THIS IS A DAMN WAR, AND IF YOU CAN’T HANDLE THAT, THEN YOU SHOULD GO HOME AND SUCK ON MAMMA’S TIT! DO YOU HEAR ME YOU RUNT? NOW GET THE HELL OUT OF MY PRESS ROOM BEFORE I GO CRAZY AND KICK THE LIVING SHIT OUT OF YOU!!
NEXT QUESTION: YOU WITH THE UGLY-ASSED TIE, LOOK AT THAT THING! IT IS HIDEOUS!”
Reporter 3: “Aren’t you going against the freedom of the press by..”
Ermey: “FREEDOM? WHAT IN BLUE HELL DO YOU KNOW ABOUT FREEDOM? I HAVE SWEATED MY ASS OFF IN JUNGLES, WHILE BEING SHOT AT FOR THIS NATION! WHAT IN THE HELL HAVE YOU DONE YOU LITTLE SHIT-SUCKING WEASEL? WHEN WAS THE LAST TIME YOU PUT YOUR ASS ON THE LINE FOR ANYTHING? AND YET YOU HAVE THE UNMITIGATED TEMERITY TO SHOW UP HERE AND MONDAY-MORNING QUARTERBACK THE ACTIONS OF A BRAVE MARINE, WHO WAS DEFENDING HIMSELF AND HIS UNIT FROM AN ATTACK BY SOME MURDEROUS AL-QUEDA SYMPATHIZER!! YOU WANNA KNOW WHAT I AM CONCERNED ABOUT, NUMB-NUTS? I AM CONCERNED ABOUT A BUNCH OF GRABASSTIC, ORGANIZED MORONS WITH CAMERAS AND MICROPHONES DOING THEIR BEST TO PORTRAY OUR BRAVE MEN AND WOMEN AS WAR CRIMINALS! I AM CONCERNED ABOUT CHICKEN-SHIT PANSIES THAT WANT US TO NEGOTIATE WITH TERRORISTS AND WHINE ABOUT THEIR PISS-ANT “FREEDOMS”!!
NEXT QUESTION.
Reporter 3: “I…I..”
Ermey: “DID YOU HAVE A BIG BOWL OF STUPID FOR BREAKFAST THIS MORNING, NUMB NUTS? I DON’T WANT TO HEAR ANOTHER WORD OUT OF THAT COMMIE CRY HOLE IN THAT SHIT-PILE YOU CALL A HEAD! AND THAT GOES TRIPLE FOR THE REST OF YOU PANSY-ASSED MORONS! NOW GET THE HELL OUT OF MY PRESS ROOM BEFORE I SHOVE MY BOOT SO FAR UP YOUR ASS THAT YOU CHOKE TO DEATH ON MY SHOELACES!!!!”
Marine DI’s have a language all their own.
God bless them all.