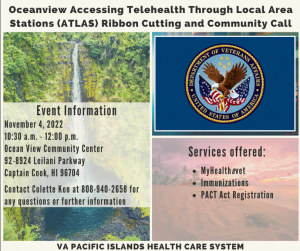 Check in and resource tables will be available at 8:15 AM.
SPACE IS LIMITED.
A breakfast buffet will be provided..

Are you helping a family member or friend to age at home in the community? You are not alone! Across the state more than 157,000 “family caregivers” are providing transportation, friendly visits, meals, help with finances, sharing their homes and much more!

Let’s learn from one another! Share your challenges and wins. Find out about community resources and the latest tools that can help you. Give yourself a chance to refuel and relax!

Health Care When You Travel

If you are a veteran and you are planning a trip, make sure that you let your Patient Aligned Care Team (PACT) know. If you are injured while on vacation, or if your bags are lost and you need to renew a prescription, your care can be coordinated to ensure that you can get help wherever you are. If you have questions, please call (808) 838-6591 or (808) 433-0202.

VA Pacific Islands Health Care System (VAPIHCS) is seeking to purchase a parcel of land on which to construct a new Community Based Outpatient Clinic (CBOC). VAPIHCS is looking for a parcel that is no less than 2 acres in the Hilo area. To be considered, the site must be outside the Tsunami Inundation Zone. For additional information, contact Marianne Marinucci at (202) 632-5468 or Marianna.marinucci@va.gov

The Department of Education recently expanded the Public Service Loan Forgiveness (PSLF) program which may forgive the remaining balance on your student loans. Under the PSLF Limited Waiver, which expires on October 31, 2022, borrowers may receive credit for periods of repayment on loans that would otherwise not qualify for PSLF.

For many years prior to 1954, it was believed by many sports experts that it was simply impossible to run a mile in under 4 minutes. But there was one individual, Roger Bannister, who sought to defy the odds and attempt to challenge that belief. On the morning of May 6, 1954, Sir Roger Bannister did the impossible, becoming the first person to run a mile in under four minutes! Before the announcer could even finish saying 3 minutes, 59.4 seconds, the audience erupted in a sea of applause. He accomplished a great feat indeed. But what’s even more interesting is what happened afterwards.

Just 46 days after Bannister’s victory, John Landy, an Australian runner, not only broke the same 4 minute barrier again, but this time with a time of 3 minutes 58 seconds. Then, just a year later, three runners broke the four-minute barrier all in a single race. And over the past half century, more than a thousand runners have conquered a barrier that had once been considered humanly impossible.

The question becomes, did human nature magically change just 46 days after Mr. Bannister’s victory? No. Instead, what changed was their mindset. That is, the runners of the past had been held back by a belief that said they could not surpass the four-minute mile, and that artificial limit became the invisible barrier holding them back. Runners must have unknowingly adjusted their abilities to fit the popular belief of the time, leaving them to lose the race to beat the 4-minute time before the race even began.

One Team, One Ohana!

We will be hosting a virtual Benefits Workshop for Veterans and supporters of Veterans in Hawaii & American Samoa on Thursday, August 25, 2022 from 4PM to 6PM (Hawaii Local Time) / 3PM to 5PM (American Samoa Local Time)

(see attached flyer). This will be a virtual workshop using Cisco Webex.

Please help us to get the word out.

~ Legislation passed the House with bipartisan support earlier this year ~

WASHINGTON, D.C. – Senator Mazie K. Hirono (D-HI), member of the Senate Veterans Affairs Committee, joined Senators Richard Blumenthal (D-CT), Susan Collins (R-ME), and 17 of their Senate colleagues in introducing the bipartisan Equal Access to Contraception for Veterans Act to eliminate copayments for contraception covered by the Department of Veterans Affairs (VA). While civilians can receive contraception without a copay through the Affordable Care Act and active duty servicemembers can receive health care—including basic contraceptive services—without copays through TRICARE, VA healthcare only waives contraception copays for a limited number of veterans. The legislation is originally authored by U.S. Representative Julia Brownley (D-CA) and was approved by the House of Representatives in June by a bipartisan vote of 245-181.

“Access to contraception is a fundamental, constitutional right,” said Senator Hirono. “But while civilians and active duty servicemembers can access contraception free of charge, hundreds of thousands of veterans receiving VA care are still forced to pay out-of-pocket costs. We owe it to our veterans to ensure they receive the quality, comprehensive health care they deserve, including contraception. The Equal Access to Contraception for Veterans Act will help do exactly that.”